Khim ឃឹម is a box zither of Chinese origin. There are two sizes: khim touch ឃឹមតូច, literally "small khim" and khim thom ឃឹមធំ, "big khim". Originally, Khmer musicians only played them in the orchestra of the Baasak theater. Later, they used it with other instruments (tro sau, tro ou, krapeu, khloy, skor, chhing) in the modern wedding orchestra phleng kar. Today it is also used in the aayaaye and mahori orchestras.

The khim zither has the shape of a butterfly (trapezium with rounded angles). Its body is made of light wood, p'deak or koki. Two rows of bridges support the strings. The strings supported by the left hand easels are played on both sides of the bridges, while the right hand strings (ko strings) can be played on one side only. On the most traditional instruments, there are seven bridges in each row, each supporting two or three strings tuned in unison. Some modern instruments have eight to ten bridges. The long trapeze is 65 cm long, 39 cm short and 25.5 cm wide. Inside the soundboard are "sound posts" that prevent the soundboard from collapsing under the tension of the strings.

The instrument is tuned with the help of metal pegs positioned laterally: on one side, to hold the strings, on the other, to tune them. The latter are struck with two bamboo mallets whose heads are covered with felt. The bridges are covered with bone (formerly ivory) on which the strings rest. The highest strings (ek) are three per height and are made of steel, while the lowest strings (ko), two per height, are made of copper. 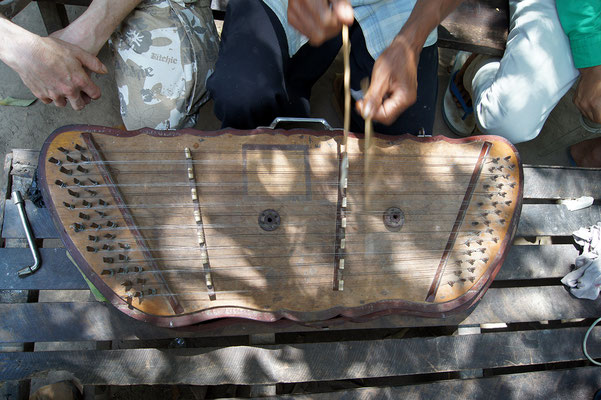 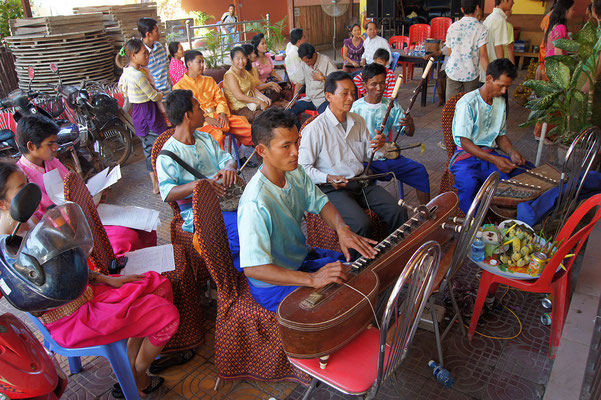 The contemporary mahori orchestra is of Thai influence but most certainly created, in principle, by the Angkorian Khmers. It is one of the few exclusively recreational orchestral ensembles. It consists here of a tro sau bicord fiddle, a krapeu tricord zither, a khim table zither, chhing cymbalettes, a skor daey drum.

These musicians, filmed in 2017 at the Preah Khan of Angkor, are victims of anti-personnel mines.

The khim thom has a trapezoidal shape, but sometimes also that of a butterfly. The body is made of a light wood: dueng chaem, p'deak or lambao while the soundboard and back are made of mango or roluoh wood រលួស. The general organological characteristics are the same as those of khim touch. The long trapezium is 110 cm long, the short one is 70 cm long and 45 cm wide.

The khim thom is distinguished by a less play of notes than the khim touch, like the roneat thong vis-à-vis the roneat ek.