The representation of flutes are rare. Therefore, we give here an almost exhaustive overview of our discoveries. The only type existing in pre-Angkorian times is the transverse flute. There is no epigraphic occurrence in the Angkor period.

In 16th century, in the north gallery of Angkor Wat, a wind instrument that could be a blockflute is also represented.

The flute through the Pre-Angkorian iconography

Transverse flutes are visible on two lintels from the 7th century. exhibited at the National Museum of Cambodia (photos 1, 2), both from the archaeological site of Sambor Prei Kuk (Kompong Thom province), and a third from Phnom Bakheng (3).

The flute (veṇu) through the Pre-Angkorian epigraphy

The foundation stele of Preah Ko temple (late 9th century) mentions several generic Sanskrit terms referring to servants specializing in music and singing, the names of three instruments including a flute and some words related to the playing itself.

"A large number of beautiful dancers, singers, reciters, female musicians, vīṇā players and others (instruments), skilled for knocking the rattle."

Vocabulary related to music and dance

A great number of beautiful dancers, singers, reciters, female musicians, zither players and others (instruments), of flute, skilled in clinking the small cymbals.

The flute (kluy) through the Pre-Angkorian epigraphy

The ancient Khmer word kluy appears on the pedestal of the central sanctuary of Kuk Prasat (994 AD) in a list of goods donations to the temple alongside two other instruments: "k[l]uy 1, kinara 1, chko 1" , "1 flute, 1 stick zither, 1 chko (unidentified instrument)". If the term kluy is perfectly identifiable, the nature of the flute remains unknown. However, if one refers to the Ancient Khmer, Indian and Borobudur iconography, only transverse flutes are represented.

The term kluy has been transmitted in the modern Khmer (khluy).

The flute through Angkorian epigraphy

The stone tapestries of the doorways of Angkor Wat offer us two medallions representing flautists holding the instrument in front of their faces.

We discovered this scene on June 22, 2020 is located on the doorway between the southwest corner pavilion and the south gallery. For a long time we had been looking for proof of the existence of an ancestor of the khloy terminal mouthpiece flute. But in addition to this discovery, we have just discovered the oldest visual evidence of the existence of the Sbek Thom shadow theater. The scene shows the ingredients of a performance of the Reamker រាមកេរ្តិ៍, the Khmer version of the Indian Rāmāyana. The central character is, of course, Preah Ream, who names the epic of the Reamker. It is noteworthy, given its importance in the story, that her head protrudes beyond the edge of the medallion. Likewise, his younger brother, Preah Leak, is below him, although to a lesser extent out of respect for hierarchy. All around him are other figures, both human and animal. At the top of the scene, in the red circle, a flutist and, in front of him, a narrator-singer. In front of the latter, a shapeless object but which is undoubtedly the screen in front of which the shadow of the figurines is projected in the light of the fire. This flute player probably embodies the orchestra that accompanies and supports the action of the Reamker, unless he is self-sufficient. This phenomenon would not be surprising. Indeed, we know, in the Arak religious ceremonies, singers whose melody is "paraphrased" by the tro fiddle, or even among the minorities of the border regions of Cambodia, Laos and Vietnam, narrator-singers who are also "paraphrased" by a flute. Thus, this instrument may have been used in representations of the Reamker in the 12th century.

If one now wonders why the flute player holds his instrument in one hand when two are needed to play, reading the explanation given in the next chapter (Festive Dance) will shed some light on this subject. 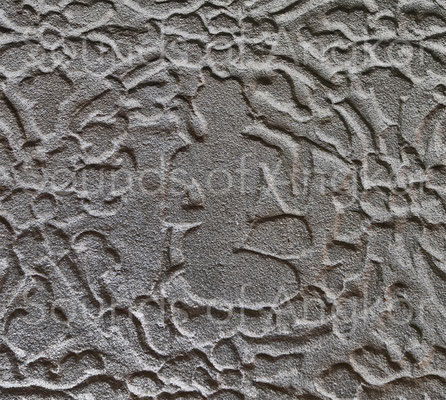 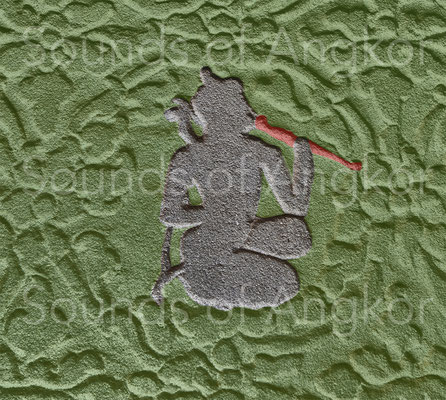 This scene, discovered on the same day as the previous one, stands on a doorway at Angkor Wat, in the south gallery of the cruciform cloister. Its general significance escapes us. It appears to be a rural scene. One can confidently detect a female dancer performing a secular dance. She is accompanied, on the far right, by a one-handed flutist and, on her left, by a cymbalist. For the latter, only the position of the hands and the context make it possible to opt for this solution. On the far left, perhaps a singer had regard to the position of his left hand, index finger outstretched.

The scene is made comical by the presence, under the cymbalist, of a hunter holding a blowpipe to kill the bird. As for the rabbit on the far right, he seems to be shouting to warn the bird! Blowpipe and flute are similar in size and position. After having observed the numerous occurrences of representations of hunters with the blowpipe in the tapestries of the pedestals, one observes that all these weapons are held with two hands. Also, we think that the holding of the flute with only one hand has for vocation not to confuse one and the other. The medallion, at the bottom left, is illegible.

The flute through the post-Angkorian iconography

In the north gallery of Angkor Wat (16th century) appears a trio of wind instruments. It could be either a blockflute as the modern Khmer khloy, or the ancestor of the pei ar oboe; these two instruments still existing today in Cambodia. It could also be a bamboo or brass free reed aerophone. The reed is embedded laterally near the upper end. The musician engages a few centimeters of the instrument in his mouth until covering the reed. This instrument is usually played at an angle of 45 °, which doesn't seem to be the case here.

The presence of three aerophones is remarkable. Indeed, instruments, whatever their nature, are always represented unitarily or by pair. But here we have the only example that escapes this rule. The author of this bas-relief may have wished that these instruments were numerous. Sets of processional flutes (transverse flute too) still exist today in Nepal to the Newar people in the Kathmandu valley. On the other hand, we don't know of any examples of pei ar oboes ensemble more than two in Asia. Therefore, our provisional conclusion would be to consider these three instruments as blockflutes.