khloy ខ្លុយ is a flute with a terminal mouthpiece fitted with a "block" device. It is available in two registers:

2. Khloy or, low pitch, whose length varies from 50 to 75 cm. This instrument has become very rare, if not non-existent. It is described by Keo Narom in his book "Cambodian Music".

Pre-Angkorian iconography (Sambor Prei Kuk, 7th century) and Angkorian iconography up to the 11th century shows only flutes with lateral mouthpieces from India (known as transverse flutes). The only two occurrences of a flute with a terminal mouthpiece were identified by Sounds of Angkor in Angkor Wat in June 2020 and are the subject of a publication on this website. Three other flutes playing together have been identified among the bas-reliefs in the north historic gallery of Angkor Wat dating from the mid-16th century.

These rare occurrences in no way exclude its probable existence at an earlier time, but without proof. Let us recall that the flute is the oldest melodic instrument known on earth.

The khloy flute is made of bamboo (pok) or hardwood. The playing holes are six or seven in a row, at regular intervals, plus one at the back for the thumb. Two additional holes, which are not for playing, are usually drilled at the lower end of the instrument to get the right note when all the holes are plugged. In the case of bamboo, the holes are drilled with a reddened cylinder iron. Note that the ethnic minorities of Ratanakiri and Mondulkiri make square holes directly with their knives, which was probably the case among the Khmers at a time when they did not have iron rods. Article and videos here.

The current trend, with the new generation of professional musicians, sees the creation of flutes whose upper part, located above the first playing hole, is physically separated from the bottom. The two sections are connected with a section of flexible plastic pipe, allowing the instrument to be extended at will to tune it to the instruments of the orchestra.

The khloy flute is above all a popular instrument, simple to make, and so light that it can be taken everywhere with you. It knows how to make up for the boredom of long hours spent with herds of cows or buffaloes. It is also the instrument with which the flute player attracts friends. The Khmers like to play or listen to the solo flute. The musicians have developed a very beautiful ornamental technique on simple melodies.

The khloy is used in various orchestral ensembles: mahori, phleng kar boran (before the Revolution), bassac, aayaye and other ensembles as well.

Khmer musicians play this flute with continuous breath, a technique difficult to master and rather rare on this type of instrument. Indeed, if it is quite easy to do it on a sralai oboe for example, with which one can block the breath while breathing, the flute requires a lower flow which does not make the task easier. The continuous breath generates a continuous sound which corresponds to the aesthetics of a music which does not suffer from silences, like the writing of the Khmer language in which words follow one another without space.

Very nice solo interpretation of this blind musician on a bamboo flute with plastic connector. This man is part of a team of landmine victims. He plays every day at the east entrance of the Bakong temple.

The contemporary mahori orchestra is of Thai influence but most certainly created, in principle, by the Angkorian Khmers. It is one of the few exclusively recreational orchestral ensembles. It consists here of a roneat ek xylophone, two tro sau and tro or fiddles, a krapeu tricorde zither, a khim box zither, a khloy flute, chhing cymbalettes, a skor daey drum.

This ensemble, filmed in 2016 in Banteay Srei, is composed of musicians who are victims of anti-personnel mines.

The khloy flute through the iconography of Buddhist monasteries

The khloy flute is an unusual instrument in the painting of Buddhist monasteries. 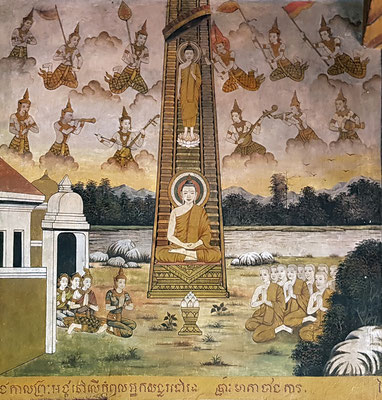 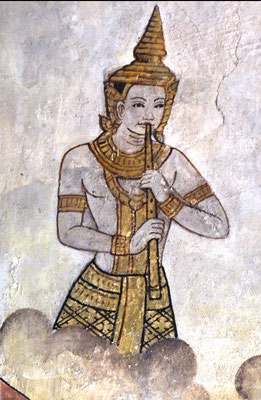