This page is dedicated to the photographs produced by Émile Gsell in the years 1866-71 on the theme of music at the Khmer royal court. These are the first photographs in the world to represent the musical instruments of Cambodia. They are always staged and not taken on the spot because the subjects had to remain static due to the relatively long exposure time. This publication deciphers the musical part of Émile Gsell's photographic work. Other images, mixed with those of Gsell, are the work of another photographer, not yet officially identified.

When King Norodom (1860-1904, eldest son of King Ang Duong, originally named Ang Voddey, then Norodom and finally Norodom I) signed the Protectorat treaty with France on August 11, 1863, the court was still based in Oudong, about 45 kilometers northwest of Phnom Penh. It officially moved to Phnom Penh in 1866. There is no doubt that the close ties between France and Cambodia facilitated access to the Palace and allowed the realization of these photographs. Let us recall that the frigate captain and no less a diplomat than Ernest Doudart de Lagrée actively contributed to the signing of the Protectorate with King Norodom and that as part of the Mekong exploration mission in Angkor, he had Émile Gsell as photographer.

It is not surprising to find, among these instruments, examples of Siamese technology probably made in Siam. Let us recall that King Norodom studied in Bangkok in order to strengthen the links between the Khmer kingdom and Siam, which at that time still exercised its suzerainty over Cambodia. It should also be noted that he found refuge in Siam before acceding to the throne. The King spoke Khmer and Thai, these two languages coexisting at court. It is not surprising then that all or part of the instruments may be Siamese. Concerning their Khmer names, we have an important testimony in the book by Jean Moura: “Le royaume du Cambodge - 1883”. Contrary to many other books published by Frenchmen during the French Protectorate, the names reported here seem reliable and even offer an interesting insight into the way in which certain names evolved with the rise of nationalism. In this page, we have added to the names given by Moura the modern qualifiers for roneat and removed the acute accents. Contrary to the established practice on this site, we have kept the "y" in chapey and sralay and the "c" in cong, in peat cong. It should be noted that both Khmer and Thai languages were used at court.

Émile Gsell has produced two distinct series of photographs of female musicians from the Royal Palace of Phnom Penh with musical instruments of different models. We present here the First Series as a diptych. The first one contains the images in portrait format, the second in landscape. Each image is numbered. This series could date from 1866.

The photomontage of vertical images includes three female musicians numbered 243, 246, 247 attested by Gsell. The dancers and actresses are presented on the page King Norodom's actresses.

Brief description of the instruments

Brief description of the instruments

Émile Gsell made a Second Series of images of the musicians of the Royal Court of Cambodia in Phnom Penh, perhaps in 1871, at the time of the inauguration of the Royal Palace. It is of better quality than the previous one. There are three types of images that we present below:

2. The orchestra with the ten musicians

3. Nine musicians individually with their instrument in playing position.

Ten female musicians are lined up in front of one of the buildings of the royal court. Based on our research, we believe that this is the building located to the southeast of the fort, near present-day Phnom Mondap. The original building has been replaced by the Reamker Gallery. The instruments in this image, although similar in nature, are different from those shown above, which proves that there were at least two physical ensembles.

We give in the table below the name of the instruments from left to right, in Khmer of the 19th century and in contemporary Thai, according to the names mentioned by Jean Moura in his book “Le royaume du Cambodge” - 1883).

Ten instruments of the mahori orchestra

This photograph shows ten instruments of the orchestra mentioned above. It could therefore also date from 1871.

We now present nine female musicians from the above orchestra photographed individually. Each one is in a playing position with the same instrument as in the orchestra. What differentiates these images from those in the First Series is the absence of the mat and a different stretched backdrop.

thong: this goblet drum is of a remarkable workmanship. At that time, the Siamese made them out of ceramic with colored and golden decorations. This one however seems to be made of wood because of the relief. The foot is decorated with diamonds. The skin is stretched by a very tight vegetal link (ropeak រពាក់ ?).

Today, such instruments can be seen in the National Museum in Bangkok and in the Suan Pakkad Palace. In its center, there is a black circle, like the Indian drums (visible on the photo of the ten instruments).

roneat ek: this soprano xylophone is recognizable by its triangular side posts. Although elegant, it remains relatively simple compared to Khmer instruments known during the reign of King Sisowath Monivong. The 21 blades appear to be made of bamboo (ឬស្សី). The red wooden case is embellished with ivory.

chhung chhap: the musician holds a pair of bronze cymbals. To her right, a drum on a frame ronmonea.

roneat dek: a simple metallophone with 20 iron blades. The body is made of wood with some ivory facings on top of the four posts.

tro: there is a certain nobility in this instrument. The three pegs are identical. The part of the neck located under the pegs is inlaid with mother-of-pearl. A hemispherical stone (or glassware?) is glued near the bridge. It is in every way comparable to the saw sam sai of Prince Paribatra exhibited in "House 1" of the Suan Pakkad Palace Museum in Bangkok. It could come from Siam, or even from the same workshop.

peat cong: we think it is a soprano gong chime (touch) and not an alto gong chime (thom) because of the diameter of its larger gongs. It has 18 gongs attached with leather ties on a rattan frame. The overall diameter of the gongs can be compared with the two instruments of  Prince Paribatra displayed in "House 1" of the Suan Pakkad Palace Museum in Bangkok. 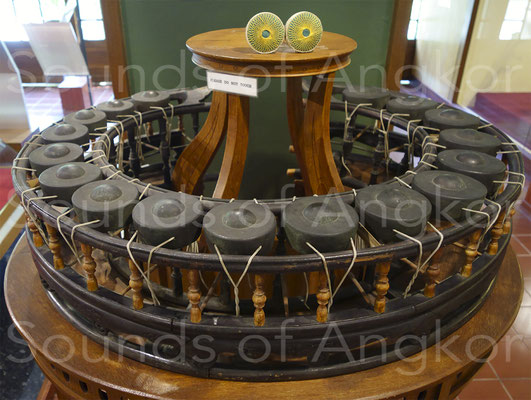 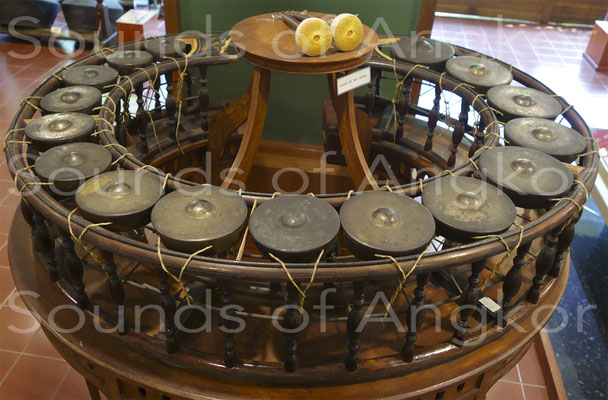 chapey: this instrument differs from the First Series in the number of frets glued to the soundboard, five versus two. It has four silk strings tuned two by two. The sounding board is ovoid. The pegs are in ivory. It most certainly comes from Siam given its proximity to the instrument in the Musée de la Musique de Paris.

khloy: blockflute with seven playing holes. The eighth one, at the bottom, is used to tune the instrument, or even to suspend it with a string. The material is uncertain but it could be bamboo. The dark color could be due to the age of the instrument or to a lacquer coating.

ronmonea: this frame drum is inseparable from the thong and the mahori ensemble. Here, both drums are played by two separate musicians, as opposed to one musician today. In the center of the membrane is a dark colored circle (lacquer?).

This video presents the instruments of the Second Series with colorizations made by Sounds of Angkor.

The names of the instruments mentioned on the screen are those used at the royal court of King Norodom in the 19th century and mentioned by Jean Moura in his 1883 book: "Le royaume du Cambodge".

The song Preah Thong ព្រះថោង is one of the oldest in the Khmer classical repertoire. It is performed by the singer Pich Chakrya ពេជ្រ ចរិយា, accompanied by an orchestra similar to the one photographed by Gsell, plus a two-stringed fiddle, which existed at that time.

We also discover, through the photographic work of Émile Gsell, that men played music in the Royal Palace. We do not know, however, whether this five-piece orchestra was assigned to the palace or whether it was invited. We are certain that this image was taken at the palace because the wall in the background is the same as that of the group of ten female musicians described above.

This five-piece orchestra represents the simplest expression of the ensemble nowadays called pin peat ពិណពាទ្យ. In Thailand, where it originated, it is referred to as piphat. We do not know what it was called at the court of King Norodom since, as we have already said, both Khmer and Thai languages were practiced at court. Until recently, this set was called phleng siam ភ្លេងសៀម in Cambodia. But for reasons of national pride, it was renamed pin peat, thus banishing the term "siam". But this history remains obscure...

Here the instruments are not duplicated and curiously, even the big drum is alone. Note that the number of musicians is similar to that of the minimalized mahori orchestra composed of five women, described above. The number five is a perfect number for orchestras. It is found in India and Nepal, notably among the Damai.

Instruments from left to right:

Another image related to the music produced by Émile Gsell is this "Cambodian on guard" probably taken, too, at the Royal Palace. This bossed gong, made by hammering, is suspended in a phtaw ផ្តៅ rattan frame. It is struck with a cloth-covered mallet. We do not know what daily events were signaled by this gong.