This page is devoted to the photographs produced by Émile Gsell in the years 1866-70 on the theme of "global theater" at the Royal Palace in Phnom Penh. These are the first photographs in the world to represent actress dancers in Cambodia. They are always stagings and not images taken on the spot because the subjects had to remain static because of the long exposure time. We complete the iconographic approach with a few descriptions taken from George Groslier's book "Danseuses cambodgiennes anciennes et modernes" (1913). George Groslier (1887-1845) lived under the reign of two Khmer kings: H.M. Norodom and H.M. Sisowath.

King Norodom was born in 1834 and reigned from 1860 until his death in 1904. He is the eldest son of King Ang Duong, originally named Ang Voddey. Originally, he was known as Norodom then, later, Norodom I). On August 11, 1863, he signed the protection treaty with France while the court was still installed Oudong, about 45 kilometers northwest of Phnom Penh. He officially settled in Phnom Penh in 1866. There is no doubt that the close ties forged between France and Cambodia facilitated access to the Palace and made it possible to take these photographs. Let us recall that the frigate captain and no less diplomat Ernest Doudart de Lagrée actively contributed to the signing of the Protectorate with King Norodom and that as part of the mission of exploration of the Mekong River entrusted to him by France, he had as photographer Emile Gsell.

Émile Gsell made two distinct series of photographs of actresses and dancers at the Royal Palace of Phnom Penh. We present here what we call "Series A". Other versions of the same photograph or characters with a different pose are sometimes available.

According to the sources, some images (244-actresses, 245-actresses, 248-dancer, 249-dancer, 253-actresses) are attributed to  Émile Gsell (Weltmuseum Wien), John Thomson (Cornell University Library) or Wilhelm J. Burger. For the time being, we have not yet been able to discover the truth. It seems that these images were taken at the court of Siam. They are of historical interest because they show that the costumes and musical instruments of King Norodom's court were inspired by the Siamese court. 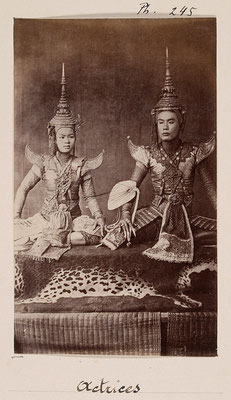 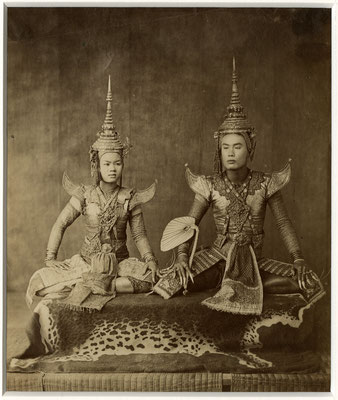 G. Groslier writes, about tiaras: "The tiara - 'mokot' - is in two parts: the conical headdress formed of decreasing tiers, and the tip. Two small wings rise up behind the ears, whose pavilions they draw. The 'mokot' is the royal headdress. That of the dancer who plays the role of king, prince or deity, is an exact reproduction of it. It is made of gold leaf set with gems and mounted on a leather or cardboard frame. The tiara worn by the man differs slightly from the one worn by the woman. It is generally higher and does not have the crescent-shaped forehead that encircles the top of the face and rises slightly in front of the ears. Arranged in crowns a few steps from the tip, small diamond rosettes shake perpetually on a tiny spring. At the other levels, light ice triangles are suspended and sway at the slightest movement." (Original in French) 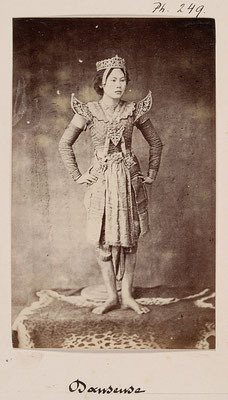 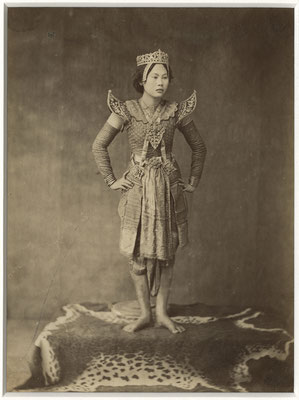 G. Groslier adds about tiaras: "The 'panntiéreth' (or panchuret), less imposing, is no less a graceful ornament. It is the light crown of the officers. A rigid knot seems to close it behind. Garlands hang all around it; and the dancer hangs, in the form of a light neck cover, a net of pearls."  (Original in French)

G. Groslier, about the preparations for the dance: "The dances are not to take place until nine o'clock in the evening, but as early as two o'clock in the afternoon, the dancers' grooming begins. They sit in long lines. They are in 'sarong' (a piece of cloth wrapped around their loins and tied in front), and light 'commin' (scarf) conceals their breasts.

Each subject is surrounded by all kinds of helpers, from the contemplative little child being pushed around to the busy and meticulous 'baya'. One of the expert dressers mixes a pinch of saffron with coconut oil in her hands. Long, carefully, she passes this unctuous paste over the face, the neck, the arms of the dancer who becomes golden. One rests while chewing a chew of betel." (Original in French) 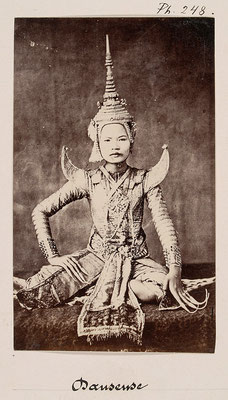 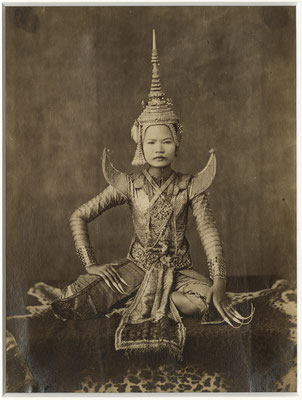 "The white, in turn, is diluted, but in water. To warm it up, and if the dancer has to play a male role, a hint of saffron is put in, otherwise it remains pure.

This white, sold by the Chinese, is crumbly, fresh, and its small lumps are crushed into an impalpable powder as soft as the finest rice powder. (...) This blush* completely changes the dancer's physiognomy, immobilizes her features, makes them look a little bigger (...)

On a saucer, with a lighted candle, the "baya" fixes some smoke, takes some at the end of an oiled bamboo and carefully draws the slender arch of the actress's eyebrows. A little red Chinese paper gives an artificial and fragile blood to the lips. (...) Then we sew the scarf or pourpoint; we fix the graceful shoulder pads, and roll or pleat the "sampot". It is only six o'clock in the evening, and you are ready. At the last moment one will pass a little more white, but this time pulverized and applied by means of a small sachet".

*This blush is pure lead carbonate, which means how damaging it is to the skin. It will be removed after the dance, by a big wash with soapy water and lemon juice."  (Original in French) 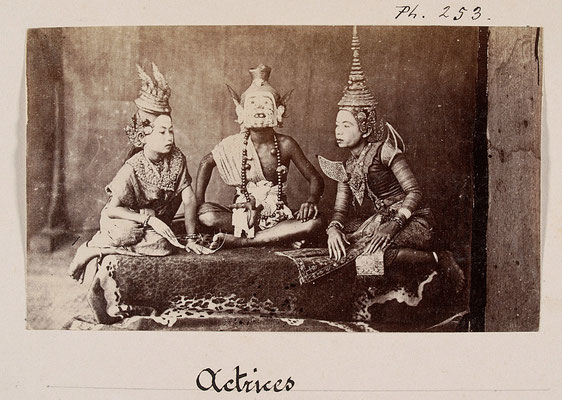 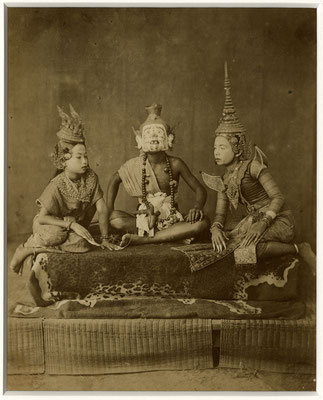 G. Groslier, about jewelry: "Gold flows in profusion. Thirty or forty rows of gold necklaces, different and with chiseled loops, roll the bust of the first dancer, on the side of the shoulder. The belt is made of gold mesh. It forms a ribbon three fingers wide. Its buckle is elliptical, curved like a shield, chased and set with about one hundred and eighty diamonds and roses...

On the chest of the 'lokhon', between her breasts, is supported by a chain a pendant as big as the hand, similar to the belt buckle, but decorated with more diamonds ...

The hand is only a jewel. Each finger, except the thumb, carries an emerald, a sapphire, a ruby. On the little finger, a small chiselled ring shines with three large diamonds.

Five kinds of bracelets, in an immutable order, charge the flexible wrist: the first is made of gem ornaments separated from each other by a gold coil; the second, small rings assembled by a cotton cord; the third is a large and supple gold coil spring; the fourth ginds eight or ten large filigree pearls; and the fifth is the exact reproduction, chased in gold, of a bracelet that expert Cambodian women make with strange flowers pressed against each other.

There are two anklets with balls for the feet. I was about to forget the earrings with long screws, made in the image of a flower, each petal of which would be a diamond; and the gold cases curved in the shape of a half-crescent are the dancers lengthened their fingers which still exaggerated the turnaround". (Original in French)

G. Groslier wrote this text during the reign of King Sisowath. Concerning the last sentence, he mentions in a footnote that "These cases are no longer used". This sentence must be put in the present tense under the reign of H. M. Norodom since the photographs of Gsell prove their existence.

Other images (of the court of Siam?)

Images, made at the same time as the previous ones, present actresses, actors and musicians. They come from the Cornell University Library. The photographer is, again, unidentified. Beyond the characters, we can identify the carpets and the leopard skin painted on a piece of cloth as common elements. 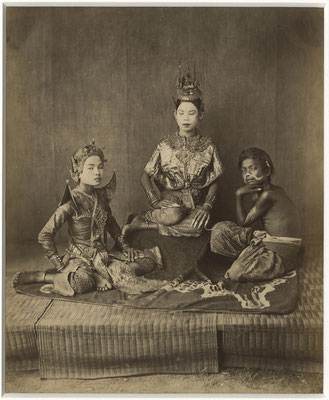 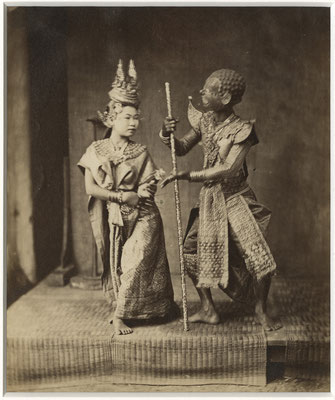 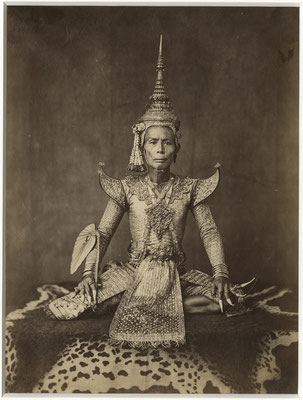 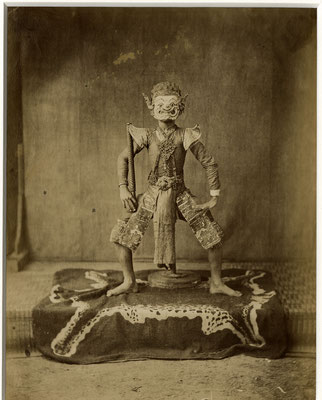 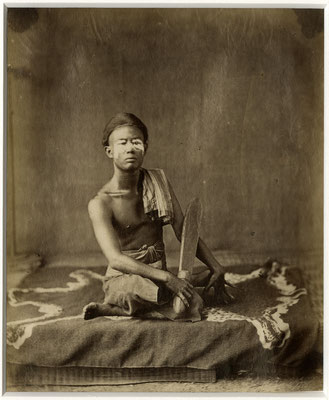 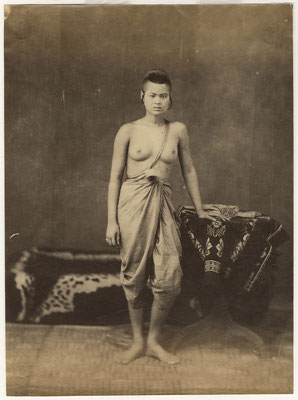 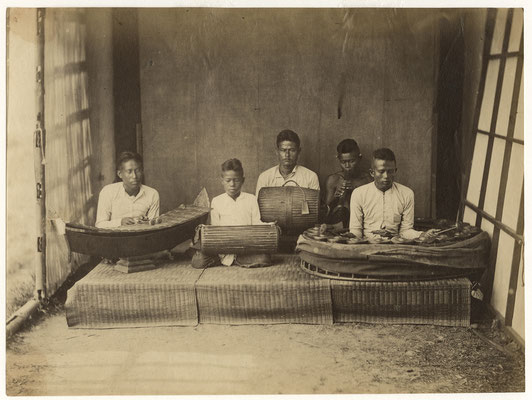 We realized in our turn the photomontage opposite which shows eight of the actors and actresses photographed independently.

From the image of the troupe above, we have extracted the pin peat orchestra. Six instruments can be identified, from left to right: xylophone roneat aek, drum skor thom (one barrel only), hanging bossed gong (this instrument has now disappeared in Cambodia in the pin peat), samphor drum, gong chime kong vong thom, oboe sralai touch (far right).

Émile Gsell made a second series of images of dancers and actresses at the royal court in Phnom Penh. Perhaps in 1871.

In the 19th century, after spending 27 years as a captive prince at the Siamese court in Bangkok, King Ang Duong, father of King Norodom, introduced the classical Siamese style of the Rattanakosin period to his court. Royal dancers, under the patronage of the royal court of Siam, are sent to the royal court in Cambodia to teach classical dance to the Khmers. This is why the costumes' style in these photographs is imbued with the Siamese culture. One will also notice the disproportionate length of the dancers' artificial nails.

G. Groslier writes: "The Cambodian dancers were so well out of their unfortunate country (after the sack of Angkor) that the last Khmer kings, up to Norodom, had almost entirely Siamese troupes. All the teachers of the five hundred 'lokhon' of Norodom were Siamese. At his death, there were more than three hundred Thai actresses in the palace of Phnom Penh. Even today (under the reign of H. M. Sisowath) all the teachers, minus two, are Siamese! …". (Original in French)

If the dance is an offering to the gods, the female dancers are themselves offerings from the people to the king. G. Groslier writes: "The dancers, who are part of the harem, are offered to the king by his people. Their parents bring them to him at the age of six. (But this custom tends to disappear). They were the most beautiful of their villages, the whitest; and the fathers were persuaded that their daughters, offered to the King, would call upon them and their families, the benevolence of Geniuses and the supreme protection. (...) The parents received from 20 to 500 piasters according to the beauty of their daughter, her age and the royal generosity; some 'sampots' and silk scarves which they left to the child and left. (...) The royal dancers no longer leave the palace unless they are chased out of it. On this point, H. M. Norodom was fierce. He allowed, only once a year, the dancer who asked him, to go to see her parents in town. She had to leave at dawn and return home before nightfall. She was accompanied by an imposing guard of matrons and children."

Such a fact is already reported in the 'Mémoires sur les coutumes du Cambodge de Tcheou Ta-Kouan' relating life in Angkor at the end of the 13th century: "the elected officials offered their daughters as royal concubines. (...) Any family who has a beautiful daughter does not fail to bring her to the palace". (Original in French)

By confronting the photos of Émile Gsell with the testimony of George Groslier, we can better understand the legible sadness on the faces of the dancers who were separated from their families at a very early age.

Organization of the corps de ballet

G. Groslier writes: "The corps de ballet is placed under the direction of the princess, the King's first wife. She is its absolute mistress, orders punishments, regulates discipline, supervises rehearsals, pays the balances and ensures the regularity of His Majesty's service.

Under Norodom, its five hundred 'lokhon' were divided into three troops. The most beautiful, the most stylish, the most richly adorned, was under the orders of the first woman: Princess Khoun Tanh. Then came the second troop, of lesser value, led by the second woman, Khoun Prea Nieth. Finally, the last one, that of the students, was led by Princess Man Soun.

Under a leader such as Princess Khoun Tanh, an iron discipline reigned. The women's quarter, which His Majesty visited every day, was kept strictly clean. There were, in the gardens, large paved swimming pools." (Original in French)