The arched harp in Champa

The Chams, like the Khmers, were Hinduized and then Buddhized. Their iconography from the 8th to the 10th century offers some examples of harp representations, most of which are nowadays kept in the Cham Museum at Đà Nẵng (Vietnam).

They are, as in Cambodia, arched harps. The string orchestras are the same as those of the Khmers: monochord zither, harp, cymbals, flute and drums. They are also similar to the musical ensembles represented in the sculpture of Borobudur.

This eardrum - c. beginning of 10th century - coming from Phong Lệ represents a Dance of Śiva. The dance is animated by a musician striking three barrel drums and a harpist playing an arched harp represented in its simplest expression, i.e. a coarse bow and a string plane. Above each of the musicians are three orants whose legs are replaced by "scales". Around the harpist, the two listening figures have their right arm over-extended, like those of the Khmer female dancers.

The Pedestal of Mỹ Sơn

The "Pedestal of Mỹ Sơn" - 2nd half of the 7th century - is a major work of Cham art. It originally supported a linga in the center of the brick temple E1 of Mỹ Sơn. Its decoration represents Mount Kailāsa, residence of Lord Śiva. In its forests and caves live ascetics whose activities are represented by niches and panels separated by small pilasters.

This pedestal is the most interesting for the study of the musical instrumentarium of both Chams and Khmers because the musical instruments of the latter were the same as those of the former at those times. However, the Khmers have left us very few iconographic testimonies between the 7th and 10th centuries. Cham art partly compensates for this lack.

Several musical instruments adorn this pedestal: a harp, a one-stringed zither, two flutes with lateral mouthpieces (transverse flute) and a set of three barrel drums. These instruments are similar to those found in Gupta Era. The list of Lolei's musical instruments, which has remained obscure due to the indeterminacy of several instruments, can be related both to the instrumental iconography of Sambor Prei Kuk, Borobudur and the present pedestal. Although the instruments are shown as independent elements in each niche, they must be seen as instruments of a coherent orchestra. However, the small cymbals and the scraper are missing. As a reminder, the orchestra of Sambor Prei Kuk's Vat Ang Khna, (7th century) also has two transverse flutes.

The harpist is located on the main face of the pedestal. His legs are crossed, a position that allows him to stabilize the instrument while playing. The sculptor has perfectly perceived the center of gravity of the harp. In addition to the ear pendant and the pouch, one will notice the beautiful hairstyle of the musician: the braided strands are held upright between two horizontal braids and then fall back in panache.

The strings are not represented. The size of the boat-shaped soundbox is modest. The sculptor decided, for reasons of solidity, to join the neck of the harp to the pilaster and to play with its shape. The neck of the real harp was certainly more arched. It ends with a scroll in the manner of the instruments of the Gupta dynasty, especially the one in the scene of Pawāyā. We do not know how many strings this instrument had. The instrument at Pawāyā shows seven, and our own reconstructions of pre-Angkorian harps show that they could hold up to a dozen. 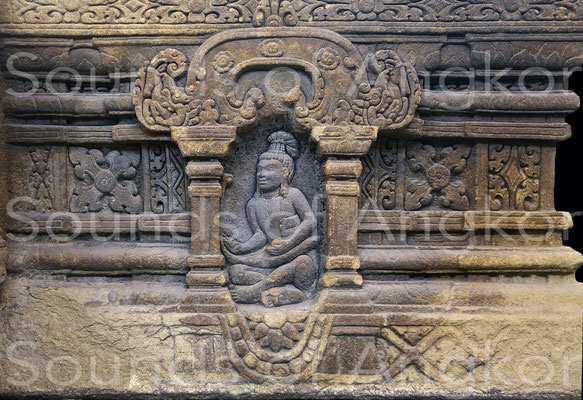 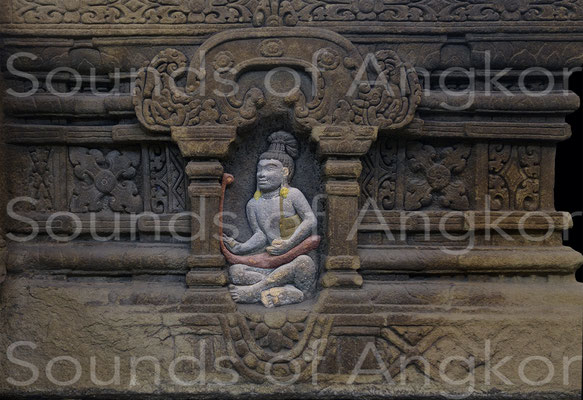 Pedestal of vihāra from Đồng Dương

Among these panels, one of them illustrates the departure of Prince Siddhārtha Gautama from his palace. This classical scene depicts a chaos of bodies and heads of sleeping musicians and dancers. Among them, a drummer, a zitherist and a harpist. This panel confirms, from a musicological point of view, the association of these three instruments in the string orchestra. The top of the neck of the harp stops sharply, contrary to other Chames, Javanese and Khmer representations where it ends with a scroll.

This monumental ensemble of the 9th-10th centuries features princes and princesses. It also includes panels illustrating the life of the Buddha and sometimes a previous existence. The pedestal is surmounted by a large statue of the Enlightened One seated in the west.