The arched harp in India

The harp under the Shunga Dynasty

The Shunga are a Hindu dynasty that ruled over part of eastern India after the dissolution of the Maurya Empire, from about 185 to about 73 BCE. The capital of the Shunga was Pasaliputra, the current Patna. Art, education, philosophy and other artistic forms flourished during this period, including the production of small clay tiles, large stone sculptures, monuments such as the stupa of Bharhut and the famous large stupa of Sanchi. Shunga leaders helped establish the tradition of royal patronage of learning and art.

One of these small terracotta tiles, dating from the first century CE, shows a harpist and a dancer, perhaps during a dance of rejoicing. It was found in present-day West Bengal. The neck of the harp is very raised, like later representations of the Gupta period. Note the device for attaching the strings to the neck made with knotted necklaces.

Some sculptures inform us about playing opportunities and orchestral formations. This Mathura bas-relief shows an arched harp accompanied by a pan flute. It shows four dancers and as many seated women.

The harp under the Gupta Dynasty

We do not know when the harp arrives in Cambodia. We only know that the Hinduization of the region began at the beginning of the first millennium of the Common Era. The expansion of the system of thought and belief that came from India developed with the tools and personnel of the source region. In the Hindu ceremonies of old, dancers, singers, and musicians were indispensable. However, the instruments used in India at that time were the zithers and harps, to mention only the cordophones.

We do not know what the harp(s) looked like at the time of the Hinduization of Cambodia, but we know of gold coins on which appears a harp whose neck is located in the prolongation of an oblong sound box, like that of the Pardhan of Madhya Pradesh which was played until recently.

The bowed harp has followed the roads of the expansion of Hinduism and Buddhism in Asia. This is why it is found in texts and/or iconography in Myanmar, China, Central Java, the Hinduized Cham territories of Vietnam and Cambodia. Among the Khmers, the first known epigraphic quotations and iconographic representations date back to the beginning of the 7th century.

The harp through the sculpture of the Gupta Dynasty

We will focus our attention on a bas-relief of the Gupta Dynasty (5th century). This sculpture can be seen in the Gujari Mahal Archeological Museum, also known as the Gwalior Fort Archeologic Museum, in the state of Madhya Pradesh. It is a broken element (180 x 65 cm) from the architrave of a temple. We offer here two versions: the original bas-relief and the partially restored and colored bas-relief. In the second version, we have extended, in black and white, the upper and lateral borders. This sculpture is an extremely important document from an organological point of view, both for its content and for the precision of the representation of the instruments.

The Pawāyā scene should be read from bottom to top. It represents a perspective that we have divided into four shots where all the characters are women.

To the right of the missing fragment stands a female drummer. Behind the two vertically arranged instruments is a larger drum placed horizontally; the musician's left hand suggests her presence. This set of three drums is found in Borobudur and Champa. No such configuration has been found in Khmer iconography; however, it is noteworthy that in the pin peat orchestra, the player of the pair of large barrel drums also plays the horizontally placed samphor drum. This organization derives directly from this period. It should be noted in passing that just because the Khmers never represented this three-drum configuration does not mean that it did not exist. In our opinion, they made iconographic choices within the limited space of the stone walls. The drum, in this version, is only the conductor of the orchestral ensemble. The best proof that this configuration existed in Cambodia is the permanence that this bas-relief confronts us with: if it persists from the 5th to the 21st century, a break of several centuries with a sudden return of several centuries back is unimaginable from the point of view of traditional know-how.

To the left of the drummer, a figure with an undefined role; it could be a singer. Her right hand is not visible, but seems to rest on her own thigh. Her left hand is resting on the thigh of the cymbal player.

Above and to the right, according to some authors, this woman is holding a lotus flower. We cannot oppose this. However, let us opt for another hypothesis, that of cliquettes, still used today in Thailand, where they are called krap phuang. In the orchestras of ancient India, we sometimes find a scraper, the wooden element of the ensemble, opposite and complementary to the metal element that are the cymbals. Until today, these two elements are used in the string orchestra in Myanmar, Thailand and to a lesser extent in Cambodia. In the 9th century, these two types of instruments are mentioned in the list of donations from the temple of Lolei (9th century / K.324S & N, 327S & N, 330S & N, 331S & N).

The structure of the harp of Pawāyā confirms several organological elements existing in pre-Angkorian Khmer iconography :

The sculptor was perfectly familiar with musical instruments, their proportions, their contours. Moreover, the musician-instrument relationship inspires confidence. For example, the lute has six strings and one can clearly see the six tuning pegs with a staggered arrangement between those at the top and bottom, which reflects the strict reality. The peg grips are spherical, like those on traditional lutes and zithers from India. As for the harp itself, it has seven strings and the tying device consists of fourteen turns, which almost corresponds to the technical reality, namely two windings for each of the playing strings. It can also be seen that the strings are parallel and not fanned out. 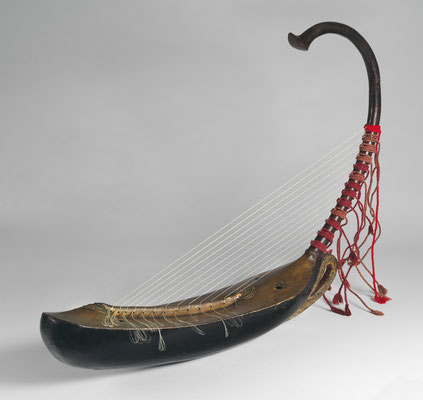 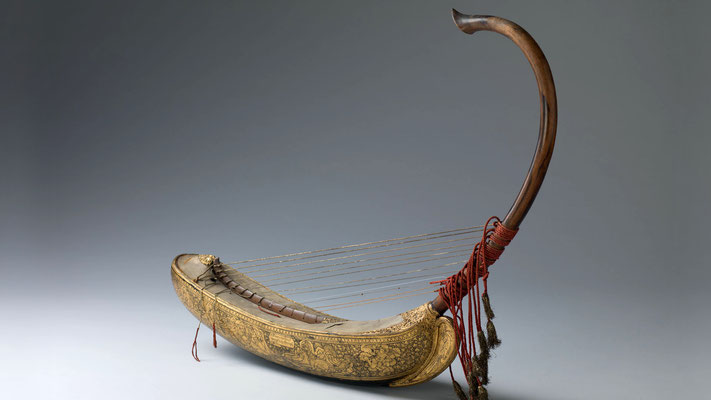 These two 19th century Burmese saùng-gauk harps show the system of string attachment as it has existed since classical India. It is still used today in Myanmar by purist musicians, while the younger generation prefers the tuning system with guitar mechanics, infinitely easier to handle.

Other sculptures from the Gupta Dynasty

The Gupta Dynasty offers us several other representations of arched harps.

The collar string attachment device is clearly visible on both tailpiece and neck.

One could rightly wonder whether it is a harp or a lute, but it is indeed a harp with its bowed neck. The second proof lies in the fact that the musician is represented playing with only one hand, which would not be possible on a lute. The head of the harp seems to be in the shape of a scroll, like the pre-Angkorian Khmer harp. The soundboard seems to be made of a knotted skin at the base of the neck. 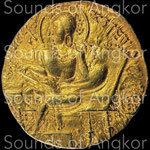 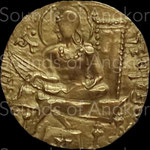 On these coins, King Samudragupta is depicted playing the harp, sitting on a high-backed seat. The fact that he wanted to convey an image of himself as a musician is remarkable and sheds light on the value system of the Gupta Dynasty. Samudragupta is known to have been a great patron of the arts; he was also an accomplished musician and poet.

Organologically, the fact that the neck is not very arched limits the number of strings, reducing it to a tool for accompanying singing, as Roderic Knight demonstrated with regard to the bin-baja (see below).

On this coin, King Samudragupta faces left. He sits on a high-backed throne and wears an elaborate headdress and plays a harp on his left thigh. On the footrest, the character "Si" is engraved for siddham (luck); to the left of the seat is a circular Brahminic legend "Maharajadhiraja Shri... guptah".

The harp of the Pardhan of Madya Pradesh

Bin-baja, bīṇ bājā, also known as Gogia bana, is a five-string harp played by Pardhan caste musicians from the Mandla region of Madhya Pradesh. It accompanied the epic songs. Only musicians from the Gogia, a small social subgroup of the Pardhan, play the bin-baja for their clients, the Gonds. The bin-baja harp, first described by Roderic Knight (The harp in India today, Ethnomusicology 29/1 (1985), 9-28) was the only harp still alive in India at that time. Its shape is similar to that of the harps of the Gupta period.

As a hypothesis, it is probable that such an instrument was imported into the Cambodian territory in the first centuries of the Hinduization of this territory.

"The boat-shaped soundbox of the bin-baja is carved from a single piece of wood. A cowhide is stretched over the opening and is attached to it with leather laces. A wooden stick, carved with deep serrated notches at one end and smooth at the other, is slightly curved while it is still green; it forms both the handle and the tailpiece. The strings, in twisted cowhide grain, are attached to the tailpiece through a lateral slit under the notches; they stretch, each over a notch, to the top of the neck to which they are attached by strings made of black cowhide tail hair. A small bamboo plectrum is attached to the body with a string. The player places the instrument on his knees with the neck to the right. With his left hand resting near the strings, he strums them with the plectrum in his right hand while occasionally strumming or dampening some strings with his left.* »

Since we were unable to acquire a bin-baja in the field due to his disappearance (to be confirmed), we decided to make a copy from Roderic Knight's photographs, odds and description. This copy was made by the instrument maker Nga Thean from Siem Reap. This realization allowed us to understand in more detail the functioning of the instrument and in particular its amplification device due to the shape of the tailpiece.

The sawtooth tailpiece allows to produce additional vibrations to the sound of the single vibrating string. The adjustment of the string in relation to the tailpiece is of the order of a tenth of a millimeter. A small piece of bamboo inserted between the base of the string and the top of the sawtooth allows the production of this vibration. This device has been known since classical India on zithers; it appears clearly in iconography. It does not allow, in the technology specifically used by the Pardhan, to space the strings sufficiently to play complex melodies. Moreover, the strings are necessarily fanned and not parallel.